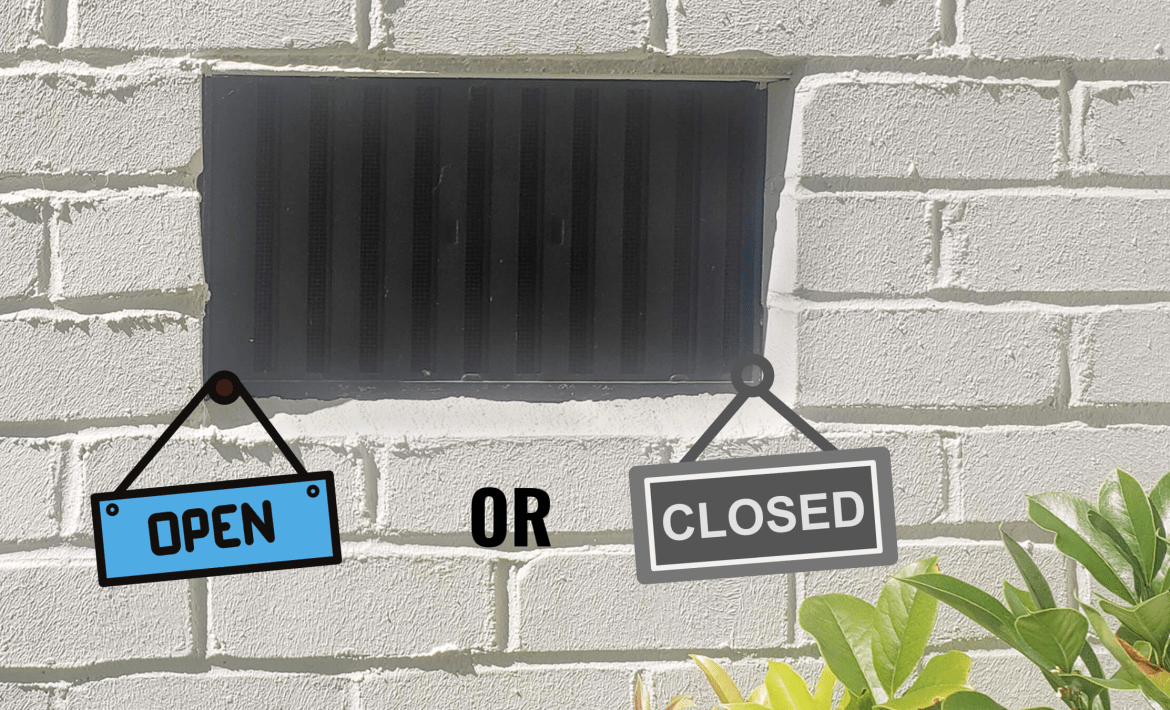 Should crawl space vents be open or closed? Like we have frequently said before, the ATMOX answer is that “it depends.” What is the situation? What are you trying to accomplish? And, what type of crawl space setup do you have?

If the crawl space has open vents around the perimeter and no mechanical ventilation or dehumidification, it seems obvious that the crawl space vents should be open. Passive ventilation with air from the outside is the only drying that is occurring within the crawl space. There are some who will suggest closing vents in the winter and opening in the summer. Here is the general theory. In the winter, keep the crawl space warmer to avoid freezing pipes. In the summer, there is higher humidity and a need to ventilate. This is also the basic operating concept behind a temperature-controlled vent. If you think this is good idea, read about “fans on a humidistat”. See why this is a very flawed concept from a moisture standpoint. The air in the winter is by far drier than in the summer.

In a newspaper article in the Pacific Northwest, a Utilities Energy Services Supervisor states: “Blocking the vents in your foundation may keep heat inside during the winter, but it’s never a good idea. It traps moisture and carcinogenic radon gas under your home, which can lead to a host of structural and home health problems down the road. Some folks justify the practice by saying it prevents pipes from freezing in cold weather, but that problem can be avoided by wrapping pipes in insulation.”

If your crawl space is traditionally vented, you generally need to keep your vents open unless you live in an extremely artic environment.

Vents in a Closed Crawl Space

Again, the answer here seems straight forward. If you have a “closed” crawl space setup, then by that very definition your vents are generally closed. It is important to remember that you don’t achieve a functioning closed crawl space just by closing vents. There has to be a drying action within the space. Generally, the drying comes from the use of conditioned air from the HVAC system or the use of a dehumidifier. With this setup, close and seal your vents. There are certainly setups that may require exhaust fans for continuous negative pressure or for radon, but that is not opening vents in general.

Vents in a Crawl Space with ATMOX Controls and Fans

In the setup with ATMOX, the question of should crawl space vents be open or closed is more nuanced. In most situations, the goal is to have a little bit of both open and closed to get the best of both worlds. However, this doesn’t mean some vents open and some vents closed. It means having open air to the outside when beneficial with regard to temperature and moisture. It also means keeping the crawl space closed when outside air is either too cold, too hot or too wet.

In most cases, the product setup will place exhaust and intake fans in vent locations as needed and will close off vent openings without fans with the use of solid vent covers. The closed vents help the crawl space by limiting outside air from coming in when not desired. It also allows the fans to better push and pull air throughout the entire crawl space when running. The ATMOX controller determines the operation of the fan and only allows outside air when it is within the acceptable temperature range and when the outside dew point is lower than inside to reduce moisture within the crawl space.

Additionally, ATMOX louvered fans take this setup one step further. Keeping the crawl space completely closed when fans are not running further minimizes the risk of freezing cold temperatures in the crawl space. The air in the space also stays tighter in situations where a dehumidifier is installed.

When making decisions for your crawl space, look at the whole situation and your geographic location to achieve the best possible moisture solution.