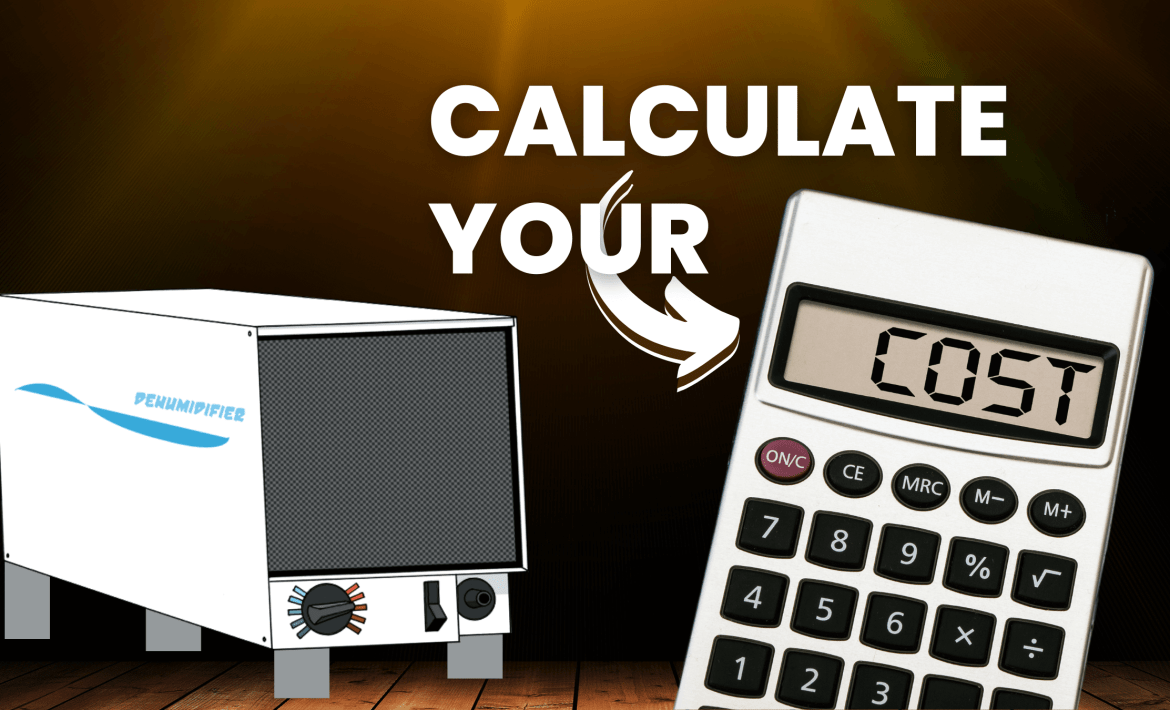 A dehumidifier is a great moisture reduction tool for the crawl space. However, the cost to run a dehumidifier can greatly impact your energy cost.

How does a dehumidifier work?

The dehumidifier’s internal fan pulls warm moist air in and then cools the air. Cold air cannot hold much moisture, so the moisture condenses and becomes water. This water is then pumped out of the unit. The drier air blows back out of the dehumidifier into the crawl space. The dehumidifier will continue to cycle the air until it receives a signal to stop. The signal to stop operation is generally set by a target humidity level.

The electrical power used by a dehumidifier is measured in watts. A watt is the unit of measurement of power.

As an aside, watts are calculated by multiplying volts times amps. These are all terms used within electricity but not critical to understand for our explanation and illustration.

Most smaller appliances are generally rated by usage in watts. However, your electric company uses kilowatt-hours (kWh) to measure your energy usage. Even some of the larger appliances in your home will state the energy consumption in kWh.

Calculating Cost to Run a Dehumidifier

Be sure to read that number twice. Yes, if an average dehumidifier in an average location were to run continuously it would cost over $700 per year in electricity cost! In general, your dehumidifier will not run 24 hours per day all year long. Even if you assume the dehumidifier ran just 50% of the time, your annual cost would be $363. If you live with in a state with high electricity cost, then it could be significantly higher. The cost is significant for one appliance!

How do You Reduce the Energy Usage of a Dehumidifier?

You may wonder how do I reduce my energy usage while maintaining the proper conditions within my crawl space? The goal of your moisture control solution should be to properly control the conditions in the crawl space while also reducing energy use when possible. One way to do this is to lessen the use of the dehumidifier with another means of drying. Using outside air when beneficial can be extremely cost effective – especially throughout the fall, winter and spring.

We already established that the average wattage of a crawl space dehumidifier is approximately 600 watts. As a comparison, four ATMOX crawl space fans will use less than 60 watts of power when running. When you compare the two, which do you think will result in a lower energy bill? It is quite apparent that the fans will always win on energy usage. In fact, they will use a tenth of the power! If those fans ran continuously, as a comparison, the energy cost would be approximately $70 per year.

Since the fans use significantly less power than the dehumidifier, using the outside air through fans as your drying action when outside air is better is the most cost-effective action. This will reduce your energy usage while still effectively controlling your moisture.

Using ATMOX Fans and a Dehumidifier to Reduce Energy Cost

A dehumidifier is a great moisture reduction tool especially in temperatures above 80 degrees. However, as temperatures drop below 80 degrees and especially as they reach 60 degrees and below, they do not operate as effectively. It becomes more difficult for the dehumidifier to cool the air to further pull the moisture from the air. However, when temperatures are colder outside, the air tends to be very dry. Therefore, using the outside air in these conditions to dry the crawl space is much more effective and energy efficient.

In comparison, on a hot humid summer day, the outside air may not be beneficial, and the dehumidifier would be the better drying option. However, throughout much of the year in most of the US, the outside air often dries more effectively and more energy efficiently.